What is the Maine Clean Elections Law?

Maine Clean Elections is a voluntary full public funding system for candidates for all state offices. Passed in 1996 by citizen initiative, Mainers decided to take on the common perception that in politics, only people with money matter. The law severs the connection between private money and public office by allowing candidates to run for office without engaging in extensive fundraising or spending their own money. After an important provision was struck down as a result of a Supreme Court decision, Maine voters returned to the polls in 2015, passing a new citizen initative that restored the Clean Elections, increased disclosure and closed loopholes in campaign finance laws.

How does it work? 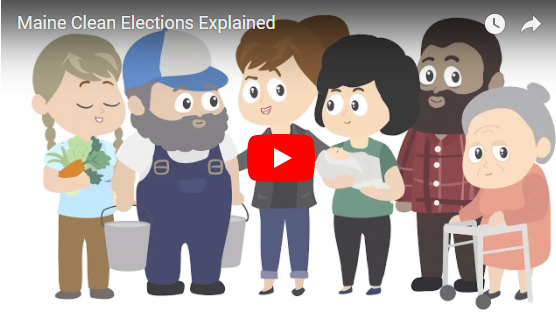 Why is the Maine Clean Election Act Important?

The Maine Clean Election Act allows anyone with enough community support to run for office, regardless of economic background or access to wealth. Before the law was passed, candidates would either spend their own money or raise funds from those willing and interested in funding a political campaign. Today, even those without personal wealth or connections can run viable campaigns.

Today, Maine voters now have more choices at the polls and Maine candidates spend more time listening and talking with voters. Maine's system is a model for the nation and other states struggling to improve their democracies. It is landmark American democracy in action, giving our government back to the voters from the control of the special interests.

The Maine Commission on Governmental Ethics and Election Practices Ethics is the independent agency in Maine that administers the Maine Clean Election Act, which includes promulgating the rules to implement the law.